The Story of Ceylon Tea – An Experiment that Went Global

Tea is a plant that has been synonymous with Sri Lanka for the longest time. The demand for Ceylon tea across the world is a testament to its quality and unique features that have drawn tea drinkers from every corner of the world. How did tea first make its way to Sri Lanka? Let’s find out.

Making its way into the lives of Sri Lankans in the 1800s, Ceylon Tea has become an essential daily beverage in almost every household across the world.

The Story of Coffee 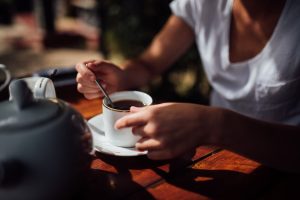 Long before major tea companies like Anverally & Sons commenced operations in the country, Ceylon tea in Sri Lanka was first cultivated and manufactured by the British. Even before tea became a beloved beverage, coffee was the reigning plant in the country. However, by the 1870s, the ‘coffee blight’ took a toll on the entire coffee industry in the country, which was a key reason to shift the attention to various plants from coca to cinchona.

While experiments with cocoa and cinchona failed, a tea plant was brought into Sri Lanka from China in 1824. Following several more experimental tea plants brought down from India, Ceylon established its tea industry when James Taylor began producing tea in 1867 at the Loolecondera estate in Kandy at the age of 17.

Following the establishment of the Planters Association of Ceylon in 1854, the island welcomed its first Ceylonese Chairman, Thomas Amarasuriya, in 1915. While the ever-so-spirited Tea Auction is held in Sri Lanka twice every week to this date, the first ever auction took place back in 1883 at M/s Somerville and Company Limited, due to the growing popularity of Ceylon Tea.

Since its journey to Sri Lanka, Ceylon tea has garnered a reputation as the finest tea in the world. Ceylon Tea was also the official tea supplier at the 1980 Moscow Summer Olympic Games, at the 1982 12th Commonwealth Games in Brisbane, and Expo 88 in Australia. Today, home to many brands, Sri Lanka is still among one of the favourite teas in the world and is still known by its former name, Ceylon Tea, a beverage that is a daily essential in most households across the globe.

The Booming Hospitality Industry – A Host of Opportunities Await

Step by step Notes on Buy An Asian Star of the wedding 99brides. com In Detail by simply detail Order

What is Service Level Management?

Internet Marketing Tips You may Apply to Make...

Benefits of Data Areas for Research

How to locate the Best Anti virus For...

The Pros of Being a Board Affiliate

Deciding on the best Board Portals